After a betrayal that brought about the end of their whirlwind relationship, both Stefan and Luna retreat to their separate corners of the world. Devastated and wrecked emotionally, Luna is at loose ends. She’s left not only her boyfriend and her lover, but also her job and her home. She’s surprised to find her next opportunity from an unlikely source – Stefan’s own father. Tucked away among sheep farmers in Shetland, Luna tries to put Stefan and everything that happened between them far behind her. She returns to Arborage for a party – but only reluctantly and at the behest of one of her closest friends. Once she’s there, Luna fights an internal battle between wanting to avoid Stefan and wanting Stefan to notice her.

After the party, Stefan and Luna share a night of passion, but it comes at a price. There’s a new element between them: a brutality borne of pain. When Stefan follows Luna to Shetland, he’s full of remorse and determined to win her back. But the new tenor of their love is darker than it once was. It was hard to read at times, but also compelling, seeing how much two people who love one another can hurt one another.

Luna and Stefan find a way back to each other, but it isn’t an easy road. At times it’s one step forward and one step back, but it’s a real story, not a fairy tale. All told, “compelling” is a good word to describe Her Master’s Servant. It’s more than “just” a romance novel, and it’s more than “just” a work of chick lit or erotica or contemporary fiction. In truth, it’s a little bit of all of those things. And it’s a convincing love story for modern readers.

Betrayed. Luna Gregory has been betrayed by both her long-time mentor and the love of her life. Reeling from the discovery that the Marchioness of Lionsbridge used her as a pawn in a plot to retain control of the 500-year-old Arborage Estate, Luna runs as far away as she can get, to remote Shetland. But though she tries to put the past behind her, she can’t escape memories of the overwhelming love she shared with the heir of Lionsbridge, Stefan Lundgren. And Stefan has vowed to get her back, by any means necessary.

Stefan ultimately reclaims what is his in a single, searing night of passion, but the wounds he and Luna have inflicted on each other run deep. As they attempt to rebuild a future together, a dark seam of power, lust and control opens up between them. Addictive as it is enthralling, Stefan’s tender abuse awakens an answering darkness in Luna. Can they stop punishing each other? Do they want to? The fate of Arborage – and of their love – hangs in the balance.

The hotly anticipated second book in the Lord and Master trilogy. 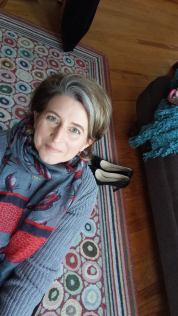 Kait Jagger lives on a farm in Lancashire, England with her husband, four children, one dog and one cat. Like Luna Gregory, the lead character in the Lord and Master Trilogy, Kait makes her living as PA. Kait is currently hard at work on the third and final installment of the Trilogy, The Marchioness.

One thought on “Her Master’s Servant, Kait Jagger”