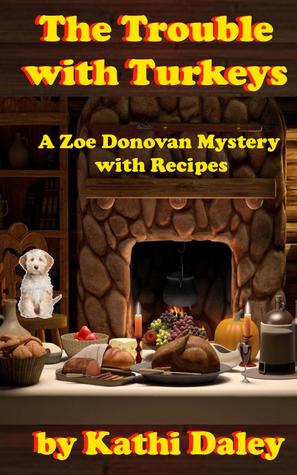 Working to take care of hundreds of turkeys destined for dinner tables wasn’t really a thrilling idea for Zoe Donovan. But being unemployed is a powerful motivator; especially when she has been feeling guilty about her friend, Jeremy, losing his job, as well. In order to keep her mind off the task at hand, Zoe plunges into the mystery of what really happened to Charles Tisdale, the owner of all those turkeys. His family thinks his death was an accident or the result of natural causes, but Zoe isn’t quite sure. Together with Zak, her former antagonist turned friend, Zoe comes up with a long list of suspects who could have wanted Charles dead and gone – double digit long.

I will freely admit that the very long list of suspects was a little daunting and pretty confusing. But I worked the case along with Zak and Zoe and had a lot of fun doing so! And that’s the thing with Kathi Daley; she makes every journey enjoyable. Her stories are filled with snapshots of small town life, friendships and families, as well as delicious recipes for later.

In The Trouble with Turkeys, Kathi Daley creates quite the challenging mystery, leaving a crumb-like trail of clues that don’t only lead readers and characters alike to a deadly conclusion, but also draw Zak and Zoe more closely together.

The Trouble with Turkeys on Goodreads

2 thoughts on “The Trouble with Turkeys, by Kathi Daley”