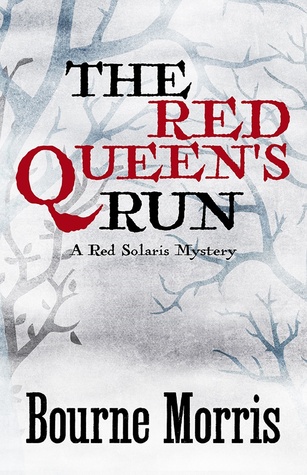 If you’ve ever been in a meeting when a few (or more than a few) coworkers have gotten into a loud and heated discussion or disagreement, you’ll know how associate dean Meredith “Red” Solaris feels among her colleagues. One might think that professors and academic doctors would be more of the calm, cool, and collected sort, but author Bourne Morris paints an entirely different picture in The Red Queen’s Run. The story is an academic thriller that reminded me very much of Joanne Dobson’s Karen Pelletier mysteries.

When the dean of Red’s journalism school is found dead, Red finds herself thrust into the middle of a chaotic set of circumstances. Suddenly she is at the helm of a very troubled ship rife with mutinous teachers, professors, and doctors. As Red mourns the loss of her friend and mentor, it becomes clear that his death was not an accident. As a result, those tense staff meetings take on a sinister tone and Red starts seeing suspect all around her. Thankfully, she has a handsome detective watching her back. Even so, he may not be enough to keep her safe and sound.

The Red Queen’s Run is the first in a planned trilogy. It masterfully sets up the series with a clever plot and plenty of suspicious characters who may be responsible for any number of nefarious deeds. Red may have uncovered one murderer in her midst, but it’s clear that the danger is far from over.

The Red Queen’s Run on Goodreads