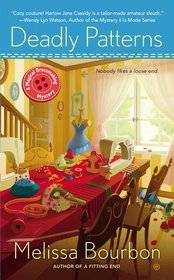 There’s nothing like coming home, and reading Melissa Bourbon’s Magical Dressmaking Mystery series feels exactly like coming home. Deadly Patterns is the third book in the series and one of my favorites.

It’s Christmastime in Bliss, and Harlow Jane is once again up to her elbows in prep work for a small town special event. At the behest of the senator’s wife, Zinnia James, Harlow is putting together a winter wonderland fashion show to be held in one of the oldest and most historic homes in the town. But a terrifying tumble nearly puts and end to Harlow’s efforts, not to mention putting her in very real danger.

The past few months in Bliss have honed Harlow’s talents, revealed her Cassidy charm, and turned her into an amateur sleuth. But becoming a “detective” isn’t the only big change in Harlow’s life: there’s also Will. The budding relationships between him and Harlow is one of my favorite features of this series. They are sweet and real and one of the best cozy couples in contemporary fiction.

One of the things that I enjoy the most in this series is how each installment pulls in pieces of the story of Butch Cassidy. Easy story is such a fun blend of Texas legend, magical realism, small town life, and a tight-knit family of strong, smart, and sassy women. All of these elements enhance whatever plot Melissa Bourbon dreams up and, together, entice readers to return again and again.

One thought on “Deadly Patterns by Melissa Bourbon”