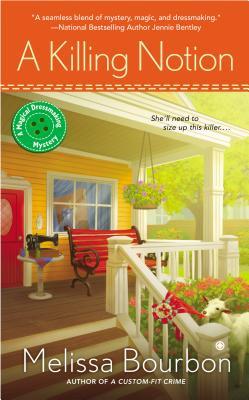 It’s homecoming time in Texas, and the only way to go is to go big or go home. Harlow Cassidy and her custom dress shop, Buttons & Bows, are in the thick of the preparations. Not only is she designing and completing two dresses for two under-privileged girls, but Harlow’s also making mums for several of Bliss High School’s gals – including Gracie, the daughter of Harlow’s beau, Will Flores. But at the crucial time – just days before the big dance – Gracie gets shocking news:  her date’s father has been killed in a car crash. And as horrible as that news is, the accident looks suspicious and Shane, Gracie’s boyfriend and the victim’s son, is suspected of tampering with the car and causing the fatal accident. Gracie asks Harlow for help and so does Shane’s mother, Reba. And as much as Will would like to keep Harlow away from the danger and out of the investigation, Harlow is compelled to play detective and clear Shane’s name in time for Homecoming.

This series has quickly become one of my favorites. The characters are vivacious and Melissa Bourbon’s descriptions of life in a small Texas town are charming. She has a way of writing that makes me feel welcome – like part of the family.

A Killing Notion is the fifth book in the Magical Dressmaking series. To date, I’ve only read the first and this fifth installment. I’m eager to return to Bliss to see how Meemaw match made Harlow and Will (from beyond the grace, no less!) and to discover the other stories and plot points hinted at in Notion.

Reading these books is like the best of your favorite things – pajamas and your most comfortable sweatshirt, curled up or stretched out in your favorite spot with a hot cup of coffee. That said, I think my cup is ready. Enjoy!

A Killing Notion on Goodreads
About Melissa Bourbon | @melissabourbon | Facebook

One thought on “A Killing Notion, by Melissa Bourbon”