True story: back in the day, before taking up my role at The Day Job, I worked for a newspaper. A very small community newspaper where I covered a local city and competed for front page above-the-fold placement with coupons for Golden Chicken. In truth, the Golden Chicken coupons were possibly more compelling, but I did my best. Journalism was never my goal, but I needed a job, and so, there you have it. Reading Small Town Spin by LynDee Walker has stirred up memories of those days in a newsroom and that is just one of the reasons I so enjoyed this story. 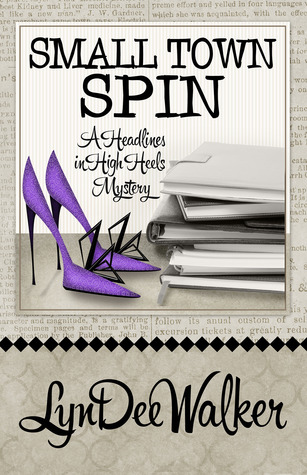 I was fortunate enough to be asked by the good chicks at Henery Press to review Small Town Spin, which will be released on April 8. It’s the third book in author LynDee Walker’s “Headlines in High Heels” series. I haven’t had the opportunity to read either Front Page Fatality or Buried Leads, but they are both on my to-read list for sure. Our heroine is Nichelle Clarke, a journalist on the crime beat in Richmond, Virginia. When the son of a former NFL star (and friend of newsroom coworker Grant Parker) is found dead, Nichelle gets a hot exclusive story and interview with the grieving parents. It’s a story that hits close to home for Nichelle and, the more she finds out about the dead teen, the more convinced she becomes that something just doesn’t add up. Add in a supposed copycat suicide and a handful of seemingly perfect suspects, and this plot is off and running.

Since I started reading mystery stories, I’ve been using a yard stick of “Can I Figure Out Who Dunnit” in order to help gauge my enjoyment of the story. In general, I find that, if I can tell right off the bat who the killer is, even great writing and a compelling character canvas struggle to keep my focus and attention. And, let’s face it: with an ever growing pile of books to read, a gal needs focus and attention! But if the thread of suspicion is strong throughout the story, I get pulled in deeper by the chapter. That thread of suspicion is very strong in Small Town Spin. I was kept guessing right up until the moment of reveal – and I’m still surprised by the killer and the motive!

Nichelle is an instantly likable narrator and heroine, well crafted and very well written by LynDee Walker, herself a journalist (and a talented one at that). The story is compelling and fast-paced, weaving in local color from the small town where the victim and his family live, as well as a larger mystery involving backwoods moonshine operations. Aside from the mystery itself, which is more than enough to tantalize a mystery-lover like myself, Nichelle is juggling two handsome admirers – each on very different sides of the law. (Have I mentioned that I’m jealous of Nichelle? Journalistic golden girl, two handsome guys both interested in her, and a closet full of adorable shoes!) I ping-ponged back and forth between being solidly Team Joey and staunchly Team Kyle. But the end of the book, I could certainly understand how both boys got Nichelle’s (and my!) heart rate elevated and I have no idea who Nichelle (or I!) will choose. But I do know that I’m highly invested in finding out!

The Headlines in High Heels Series

One thought on “Small Town Spin, by LynDee Walker”