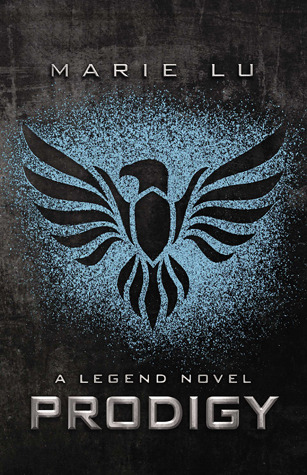 I’m happy to report that Prodigy is a very good “book two.” I admit I should have revisited Legend before I started reading, because I found myself a little confused. The confusion cleared as I continued reading, though.

Day and June are on the run from the Republic to the Patriots. Once there, they hope the Patriots will help them find Day’s little brother, Eden, as well as his friend Tess. They find Tess right off the bat and things have changed between her and Day. Perhaps she’s always had feelings for him, but Day’s starting to realize them. At the same time, he’s falling more and more in love with June who had a very hard time allowing herself to relax her grip on logic and fall in love with Day in return.

The Patriots enlist Day and June’s help with a plan to assassinate the new Elector and, hopefully, cause a revolution to overthrow the Republic. But, as both Day and June play out their roles in the plot, things become more and more unclear. June begins to doubt the intentions of the newly crowned Elector and Day struggles to determine if he should follow his hatred for the Republic who tormented him and his family, or trust in June, who seems to be leading him in another direction.

I’m very glad that Marie Lu didn’t delve too deeply in the love triangle plots of Day/June/Anden and Day/June/Tess. She touches on them, but, at the same time, draws tighter the inevitable connection between Day and June. “Prodigy” has a lot of action, intrigue, and plot twists that make for an exciting read, as well as some touching and romantic scenes that are captivating in their own way.

The twist that comes just at the end of the book regarding Day’s future is hard to swallow. After everything that he and June have been through – and, honestly, still have to face – it’s not what this reader wanted to read! But I’m hopeful that author Marie Lu has some crafty cards up her sleeve for book three, Champion.

One thought on “Prodigy, by Marie Lu”