Fortunately, Margaret Foxe knows how to write a scene. Prince of Hearts, book one in the Elders and Welders Chronicles is a Victorian steampunk romance. Sprinkled with a hearty dose of abominations, vampires, and other-worldly creatures, of course. And it’s quite the entertaining read! 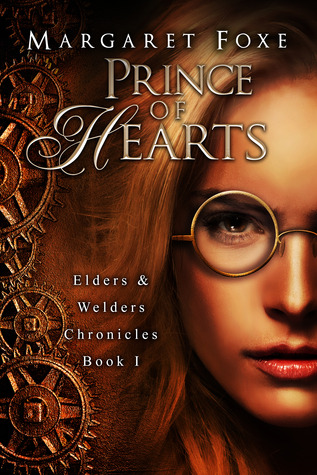 It’s London, 1896 and Aline Finch, secretary to the renowned criminologist Professor Romanov, has just about had it with her employer. She’s about to give her notice, finish her two weeks, get married in a simple service to her perfectly acceptable fiance, and honeymoon in Egypt while her fiance, Charlie, conducts an archaeological expedition. If only the Professor would let her get a word in edgewise. And if he hadn’t disappeared for over a month when he promised to return in two weeks.

What Aline doesn’t know is exactly who – and what – her employer is. To the world in 1896 London, he is Professor Alexander Romanov. To the other 12 Elders, he is Ivan Alexander Ivanovich, favorite son of Ivan the Terrible. Oh, and he’s over three hundred years old. A killer has been taunting Sasha (as he is known to a few trusted friends) for most of his existence, murdering women and extracting their hearts . . . while they are still alive. What Sasha and the other Elders can’t agree on is who the culprit is. Try as he might, many Elders can’t quite shake the feeling that Sasha himself is the killer. But as the pattern of killings becomes more and more clear, Sasha realizes that it is his secretary who is in the most danger.

When Sasha does make it back to London, he finds his secretary gone and a nagging feeling that his life is worse for the wear without her – and not just because of her high level of skill in managing his affairs. The Professor sets out to find Aline and lure her back, both for her safety and his convenience. But he soon realizes that he wants more than just a secretary; and Aline finds herself thinking more and more about the Professor in increasingly romantic ways.

Foxe writes great back stories for both Sasha and Aline, painting a clear portrait of the previous five years of Aline’s employment with the Professor without weighting down her story with every particular. I really liked how she slowly drew the pair together – each coming to the realization that their relationship is more than simply employer and employee – more than friends, even – in their unique way. And what I wrote about Foxe setting a scene? My oh my, Margaret Foxe sure pens a steamy and sexy seduction!

Now, I do have one complaint. There is a touch of my least favorite plot device (“I must leave you for your own good!”) in the story, but, thankfully, it wraps up without being drawn out overly long.

Prince of Hearts has something for everyone – history, murder mystery, humor, romance, danger, and more. It’s a thrilling read with very memorable characters, settings, and scenes. (Here’s my disclaimer: I received a copy from the author in exchange for a review and, honestly, I think I got the better end of the bargain in this case!) I’m eager to read more of the Elders and Welders Chronicles – and I sure hope Aline and Sasha make many appearances in subsequent books!

About Margaret Foxe
Prince of Hearts on Goodreads