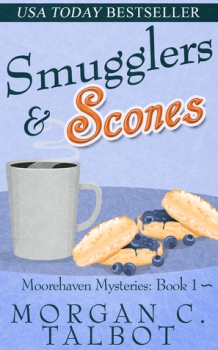 When you run a bed and breakfast that caters exclusively to mystery writers, you’re bound to learn to expect the unexpected. Pulling an injured boat pilot from a half-sunk ship, however, wasn’t something Pippa Winterbourne planned on. Nevertheless, said boat pilot (aptly named Lake) is soon tucked into a guest room at Moorehaven Bed and Breakfast per doctor’s orders. The next morning, Pippa wakes up to find that she spent the evening tucked in Lake’s arms! A shocking turn of events, no doubt. But could it also be deadly? Lake’s boss is found dead on board the sunken vessel and all eyes turn to the most likely suspect: the handsome, new-in-town drifter with whom Pippa just spent the night (sleeping only!).

Smugglers & Scones is a quirky read that kept my attention captured. Clever characters, pulse-pounding plot points, and the occasional enticing double entendre–what’s not to like? Be sure to add this series-starting mystery to your to-read list!

About the Book
Pippa Winterbourne runs Moorehaven, the Oregon Coast’s quirkiest bed-and-breakfast and former home of world-famous mystery writer A. Raymond Moore. Guests come there to write their own crime novels. When a real-life murder takes a local’s life and washes a handsome boat pilot into her arms, Pippa is yanked into a deadly plot of her own. A tangle of secrets crashes past into present, and Pippa must uncover clues dating back to Seacrest’s Prohibition days, including a secret Moore himself hid from the world.

Juggling her book-writing guests, small-town intrigues, secret club agendas, and a possibly fatal attraction, Pippa must sort fact from fiction to know who to trust before a desperate killer claims a final revenge nearly a century in the making.

About the Author
USA Today Bestselling Author Morgan C. Talbot is an outdoorsy girl with a deep and abiding love for the natural sciences. Her degrees involve English and jujitsu. She enjoys hiking, camping, and wandering in the woods looking for the trail to the car, but there isn’t enough chocolate on the planet to bribe her into rock climbing.

When she’s not writing, she can be found making puzzles, getting lost on the way to geocaches, reading stories to her children, or taking far too many pictures of the same tree or rock.

Morgan is a member of Sisters in Crime and Mystery Writers of America and served as a panelist at Left Coast Crime 2015: Crimelandia. She lives in Eastern Washington with her family.