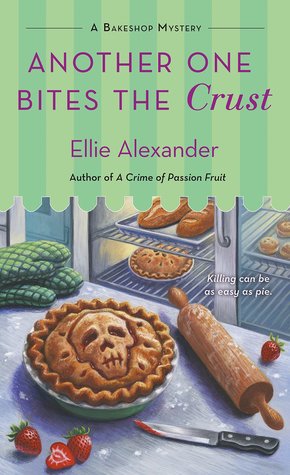 People:  The usual gang from Torte is back! Jules and her mom, Andy, Sterling, Stephanie, Bethany, and Lance. And, since it is a murder mystery, the Professor and Thomas are involved, as well. New characters for this story include OSF set designer Thad, actors Tracy, Brock, and Antony, and costume designer Vera MacBohn (more about her later!).

Plot:  Jules is happy to be back on solid ground and at Torte after a week at sea. Spring is right around the corner in Ashland; the bakery is expanding, the theater season is running previews, and Jules is helping her mom plan for her wedding to the Professor. The trouble is that Lance (the theater’s Artistic Director and Jules’s friend) seems high-strung and out of sorts. After hiring Juliet and the crew at Torte to provide theme desserts for a party, Lance shows up at Jules’s apartment in the middle of the night carrying a dagger and covered in blood. But Jules knows that her friend can’t be a killer – even if the victim is the prima donna actor who has been antagonizing Lance for weeks. Lance begs Juliet for help and, of course, she can’t turn him down.

Perspective:  Another One Bites the Crust is the seventh book in Ellie Alexander’s Bakeshop Mystery series. I’ve been a fan since the first book, but I must admit that this one has a special place in my heart. I had the opportunity to name a character in this story – Vera MacBohn. Vera is named after my niece (Vera – a Dutch bunny) and my nephew (Macca – a spaniel hound mix), both of whom passed away in 2016. It was delightful to have them immortalized on the page!

Aside from that particular delight, the story itself is Ellie Alexander at her best. She weaves together tempting recipes, tantalizing mystery, and irresistible characters expertly.

About the Book
Torte―the beloved small-town bakeshop run by Jules Capshaw―is set to hit the stage. But who would have guessed that murder would makes a surprise appearance?

It’s the role of a lifetime for Jules. The Shakespeare Festival has returned to Ashland, Oregon, for the season and Torte has been cast as the supplier of Elizabethan-era treats for the main event. But on the eve of opening night, a brawl between Jules’s friend Lance, the artistic director, and a strapping young thespian named Anthony almost brings down the house. . .and the next morning, Anthony is dead. Jules knows that Lance loves his drama―and his just desserts―but she also knows that murder is way off-script for him. Now it’s up to Jules to cut through a bevy of backstage betrayals and catty co-stars who all have their own secrets―before the curtain drops on someone else. . .

About the Author
Ellie Alexander, author of the Bakeshop Mystery Series (St. Martin’s Press), is a Pacific Northwest native who spends ample time testing pastry recipes in her home kitchen or at one of the many famed coffeehouses nearby. When she’s not coated in flour, you’ll find her outside exploring hiking trails and trying to burn off calories consumed in the name of research.

Find out more about Ellie and her books by visiting her website or following her on Facebook.

One thought on “Another One Bites the Crust, by Ellie Alexander”