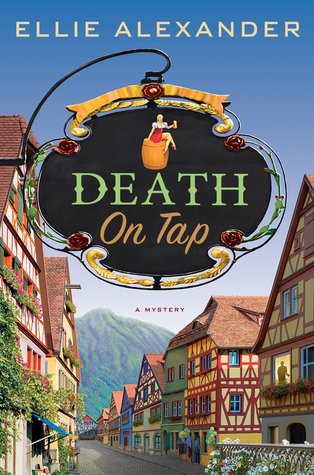 People:  Sloane Krause is a skilled craft brewer. She is married to Mac and the couple share a son, Alex. Mac’s brother, Hans, and his parents, Otto and Ursula, are also key players, as is Garrett, the new-in-town brewer.

Plot:  After growing up in foster care, Sloane cherishes her family above all else. Which is why it is so devastating to find her husband, Mac, cheating on her. The betrayal sends Sloan reeling, and she leaves the safety and comfort of Der Keller, the Krause family brewing establishment in Leavenworth where she has worked for years. Sloan gets a fresh start by helping a new brewer in town – Garrett. Garrett’s insistence that everything stay secret and locked up is a foreign concept to Sloan, who is so used to the trusting small town life of Leavenworth. And then odd things start happening – Garrett’s office is broken into and Sloane finds a body floating in one of the vats. When all evidence seems to indicate Sloane’s estranged husband Mac is the culprit, she gets involved in the investigation – he may be a liar and a cheat, but Sloane knows her husband is not a killer.

Perspective:  Ellie Alexander is one of those authors whose work I will always jump at the chance to devour. She writes with a keen attention to detail, character, and a respect for her craft, all of which means a delight for readers. Being a fan of her Bakeshop Mystery series, I knew that I would find nothing but a wonderful story in Death on Tap. For beer lovers, this book is extra enjoyable! I’m looking forward to seeing what’s next for Sloane and her Beervaria community.

About the Book
When Sloan Krause walks in on her husband, Mac, screwing the barmaid, she gives him the boot. Sloan has spent her life in Leavenworth, Washington becoming an expert in brewing craft beer, and she doesn’t have time to be held back by her soon-to-be ex-husband. She decides to strike out on her own, breaking away from the Krause family brewery, and goes to work for Nitro, the hip new nano-brewery in the Bavarian-themed town. Nitro’s owner, brewmaster Garrett Strong, has the brew-world abuzz with his newest recipe, “Pucker-Up IPA.” This place is the new cool place in town, and Mac can’t help but be green with envy at their success.

But just as Sloan is settling in to her new gig, she finds one of Nitro’s competitors dead in the fermenting tub, clutching the secret recipe for the IPA. When Mac, is arrested, Sloan knows that her ex might be a cheater, but a murderer? No way. Danger is brewing in Beervaria and suddenly Sloan is on the case.

About the Author
Ellie Alexander, author of the Bakeshop Mystery Series (St. Martin’s Press), is a Pacific Northwest native who spends ample time testing pastry recipes in her home kitchen or at one of the many famed coffeehouses nearby. When she’s not coated in flour, you’ll find her outside exploring hiking trails and trying to burn off calories consumed in the name of research.

Find out more about Ellie and her books by visiting her website or following her on Facebook.

One thought on “Death on Tap, by Ellie Alexander”