This is a story that will stay with you.

Told in two parts, readers are first introduced to Verity, aka Queenie, who is a Scottish wireless operator working against the Nazis in WWII. She’s been captured and tortured and the text we read is information she has agreed to give to her captors about the resistance. As Verity writes about the war, her imprisonment, and her relationship with Maddie, the pilot of the plane she arrived in France on, readers are drawn into the fierce friendship between the girls. I couldn’t help but wonder what would happen next for Verity. Her descriptions of torture and imprisonment, how she writes about Maddie and her family, are heart wrenchingly vivid.

In order to avoid giving anything away, I won’t describe the plot any further, except to say that it was masterfully crafted.

My true rating is more accurately 4.5, just because I found myself getting weighed down in some of the descriptions of airplanes and flight training. Details about battles or similar descriptions have never been a favorite of mine – no matter what the book. So I honestly skimmed over those parts, gleaning the pertinent bits of info that I would need to more deeply understand the rest of the story.

Overall, however, this book is definitely a favorite. There’s something haunting about the story, in a way that hurts my heart, but also lifts it. 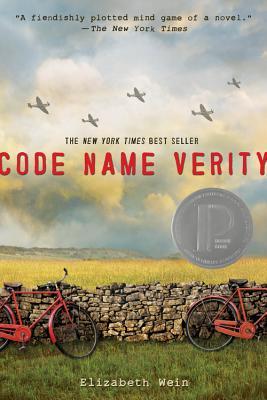 About the Book
Oct. 11th, 1943-A British spy plane crashes in Nazi-occupied France. Its pilot and passenger are best friends. One of the girls has a chance at survival. The other has lost the game before it’s barely begun.

When “Verity” is arrested by the Gestapo, she’s sure she doesn’t stand a chance. As a secret agent captured in enemy territory, she’s living a spy’s worst nightmare. Her Nazi interrogators give her a simple choice: reveal her mission or face a grisly execution.

As she intricately weaves her confession, Verity uncovers her past, how she became friends with the pilot Maddie, and why she left Maddie in the wrecked fuselage of their plane. On each new scrap of paper, Verity battles for her life, confronting her views on courage, failure and her desperate hope to make it home. But will trading her secrets be enough to save her from the enemy?

A Michael L. Printz Award Honor book that was called “a fiendishly-plotted mind game of a novel” in The New York Times, Code Name Verity is a visceral read of danger, resolve, and survival that shows just how far true friends will go to save each other.

About the Author
Born in New York City in 1964, Elizabeth moved to England when she was three and started school there. Her father Norman Wein, who worked for the New York City Board of Education for most of his life, was sent to England to do teacher training at what is now Manchester Metropolitan University, where he helped organize the Headstart program there. When Elizabeth was six, Norman was sent to the University of the West Indies in Jamaica for three years to do the same thing in Kingston. Elizabeth lived in Jamaica from 1970-1973. She loved Jamaica and as a child was fluent in Jamaican patois. It was in Jamaica that she first started reading, and consequently, first started writing. At the age of seven, she and a friend completed a “book” called The Hidden Treasure as part of a “mystery series” based on the Hardy Boys!

When her parents separated, Elizabeth and her younger brother and sister ended up back in the USA living with their mother Carol Flocken in Harrisburg, PA, where Carol’s parents were. When Carol died in a car accident in 1978, Carol’s parents took the children in and raised them. In the years immediately following her mother’s death, books were Elizabeth’s lifeline, particularly fantasy. Inspired by JRR Tolkien, Alan Garner and Ursula K LeGuin, Elizabeth completed an epic fantasy novel, By Sunlight and Starlight, at 14. In retrospect it was mostly awful, described by one contemporary reader as “the stupidest book I ever read,” but it was very good practice. Elizabeth then discovered King Arthur (through Mary Stewart, TH White and Susan Cooper), and at 15 started work on the characters and storyline which eventually became her first published novel, The Winter Prince.

Elizabeth went to Yale University, spent a work-study year back in England, and then spent seven years getting a PhD in Folklore at the University of Pennsylvania in Philadelphia, where she held a Javits Fellowship. While in Philadelphia she learned to ring church bells in the English style known as “change ringing”, and in 1991 she met her future husband there at a bell ringers’ dinner-dance. Tim is English, and in 1995 Elizabeth moved to England with him, and then to Scotland in 2000.

It was Tim’s enthusiasm for small planes that inspired Elizabeth to learn to fly. Tim got his private pilot’s license in 1993 and Elizabeth got hers ten years later. Together they have flown in the States from Kalamazoo to New Hampshire; in Kenya they’ve toured from Nairobi to Malindi, on the coast, and also all over southern England.

Alone, most of Elizabeth’s flying has been in eastern Scotland, where she has now lived for over fifteen years. She wrote all but one of her novels since moving to Scotland. Her early books for young adults are set in Arthurian Britain and sixth century Ethiopia, including the sequence The Mark of Solomon, published in two parts as The Lion Hunter (2007) and The Empty Kingdom (2008).  The Lion Hunter was short-listed for the Andre Norton Award for Best Young Adult Fantasy and Science Fiction in 2008.

One thought on “Code Name Verity, by Elizabeth Wein”