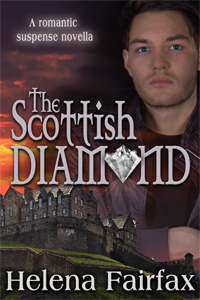 What do you do when nothing is what it seems . . . even the man you love?

“Fair is foul, and foul is fair…”  When Lizzie Smith starts rehearsing Macbeth with her theatre group in Edinburgh, she’s convinced the witches’ spells are the cause of a run of terrible luck. Lizzie’s bodyguard boyfriend, Léon, is mysteriously turned down for every job he applies for, until he’s finally offered the job of guarding “The Scottish Diamond,” a fabulous jewel from the country of Montverrier.

But the diamond’s previous guard has disappeared in mysterious circumstances. The Scottish Diamond has a history of intrigue and bloody murder, and Lizzie is plagued by nightmares in which Macbeth’s witches are warning her of danger.
Then Lizzie discovers she’s being followed through the streets of Edinburgh, and it seems her worst fears are about to be realized . . .

I continued to frown up at him, troubled. He took my face in his hands and kissed me.

‘I know what it is,’ he said, his eyes twinkling. ‘It’s all your talk of witches and ghosts. Your Scottish superstitions are rubbing off on me and I’m seeing things in this gloomy weather that aren’t there at all.’

He swung me into his arms and kissed me again.

After that, Léon dismissed his vigilance as something brought on by the strangeness of his new city. And once he began his new job at the Castle, he didn’t mention being followed again, and in fact, all the tension he’d been showing disappeared, and he became almost his old self. He left the house with a sense of purpose that had been lacking in his previous aimless wanderings around Edinburgh. And the best thing was, he was beginning to understand more and more of our Scottish brogue every day.

I later discovered it wasn’t just our Scottish way of speaking he was mastering. A few days after he started work, I was in the kitchen preparing our evening meal, when I heard the front door close and Léon’s light tread in the hall. Usually he went straight upstairs to change, but this evening he came directly to the kitchen and put his head round the door. His eyes brimmed with amusement.

I stepped closer to give him a kiss, and he pushed the door wide. My mouth fell open. He was dressed in a kilt. The green tartan cloth was thrown over one broad shoulder in Highland fashion, and the pleated skirt revealed an inch or two of tanned, muscular leg above a pair of thick, cream-coloured socks.

‘Wow,’ I stuttered. ‘You look…’ I breathed out in a long whistle. ‘You look amazing.’

He smiled broadly, showing his white, even teeth in one of the first real smiles I’d seen him give since we left Europe.

‘This is my new uniform.’ He spread his arms a little, glancing down at himself. ‘Not a bad effort for a half-Italian, half-Montverrian. What do you think?’

‘Not bad at all.’ My face decided right then and there to turn a decided pink, and to hide the fact that I couldn’t keep my eyes off him, I threw my arms around his neck and planted a kiss below his ear.

His arms encircled me, and he murmured, ‘Ever made love to a man in a kilt?’

And after that, everything between us was perfect again. All my worries about Léon wanting to go home to Italy, and all his former tension vanished, and we were just as we had been during those idyllic two weeks we’d spent at his home on the Amalfi coast that summer.

But of course, perfect times can’t last forever. Everything changed when I realized it wasn’t Léon who was being followed. It was me. 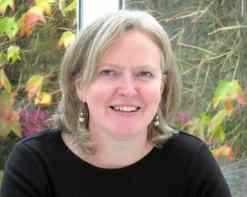 Helena Fairfax writes engaging contemporary romances with sympathetic heroines and heroes she’s secretly in love with. Her first novel, The Silk Romance, was a contender for the UK’s Romantic Novelists’ Association New Writers’ Scheme Award and a runner-up in the Global Ebook Awards. Helena Fairfax was shortlisted for the Exeter Novel Prize in 2014.
Helena is a British author who was born in Uganda and came to England as a child. She’s grown used to the cold now, and these days she lives in an old Victorian mill town in the north of England, right next door to the windswept Yorkshire moors. She walks this romantic landscape every day with her rescue dog, finding it the perfect place to dream up her heroes and her happy endings.

Social Media Links
If you’d like to get in touch, or find out more about my books, writing, and photos of my settings or the Yorkshire moors where I live, please follow my newsletter by subscribing here: http://eepurl.com/bRQtsT

All new subscribers to my newsletter will receive a FREE copy of Palace of Deception – a romantic suspense novella.