Since reading the first of Julie Anne Lindsey’s Geek Girl Mysteries, A Geek Girl’s Guide to Murder, in 2015, I have been eagerly awaiting the next book. And now I’m left to even more eagerly await the third book!

It’s been three months since the events that changed Mia Connors’ life: the murder of one of her best friends, her involvement in the investigation, and the attack by someone she never suspected. Not to mention the day Jake Archer left town with her heart. Mia’s a more cautious version of herself, but she is still wonderfully quirky, witty, smart, and vibrant; she is honestly one of my favorite characters in contemporary fiction. While working at her family’s business booth at the Renaissance Craft Faire, Mia strikes up a conversation with an acquaintance, John, a talented painter. Just moments later, John collapses and is pronounced dead. Mai is stunned to see Jake Archer on the scene, especially since he is now a Deputy US Marshall and she had no idea he was back in town. Once again, it looks to Jake that Mia is involved in a murder investigation and, no matter how many times or ways he tells her to stay out of it, Mia doesn’t listen. What seems to be a federal case with mob family involvement quickly becomes something much more sinister – a plot with Mia squarely in the center.

There is so much to like about this book and this series. I feel a little like a gushing fangirl, but I don’t mind! Julie Anne Lindsey writes with insight, humor, wit, passion, and admirable skill. She has constructed a wonderful fictional canvas that I would live in without a moment’s doubt if it were possible. Mia and her whole family are wonderfully alive on the page, as is the awkwardly captivating romance between Mia and Jake. Truly, it broke my heart when Jake left at the end of A Geek Girl’s Guide to Murder and I felt it skip back to life as soon as he entered the first scene in A Geek Girl’s Guide to Arsenic. I see so much of myself in Mia (truthfully, I wish I were more like her!) so it’s easy for me to get completely wrapped up and lost in the story.

A Geek Girl’s Guide to Arsenic is easily one of my favorite books of the year – of any year – and I can’t wait for the next story. In the meantime, I’ll just be rereading the first two books over and over again until the fall! 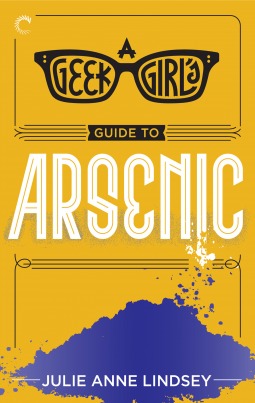 A Geek Girl’s Guide to Arsenic
(The Geek Girl Mysteries)

It’s been three months since Jake Archer rolled into town, accused Mia Connors of murder and stole her heart. She hasn’t heard from him since. So when a man collapses at the fall Renaissance Faire, she’s surprised to see the US marshal arrive on scene. And shocked when he points the finger at her—again. Mia would sooner be able to resurrect the poor fellow than poison him.

Jake Archer’s career has been rising fast, but it’s about to come to a crashing halt. The Ren-Faire victim was in protective custody—Jake’s custody—and they were painfully close to nabbing a major crime boss. If Jake doesn’t solve the murder soon, he’ll be fetching donuts instead of protecting his nation. A difficult enough task without the alluring Mia Connors in the way.

Working with Jake to catch the killer might push Mia into crazy-cat-lady territory. But with a murderer on the loose—and Mia’s reputation on the line—they’ll have to work fast to find the killer before the killer finds them. 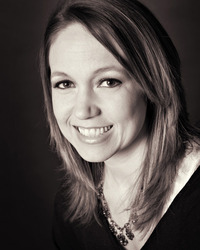 Julie Anne Lindsey is a multi-genre author who writes the stories that keep her up at night. She’s a self-proclaimed nerd with a penchant for words and proclivity for fun. Julie lives in rural Ohio with her husband and three small children. Today, she hopes to make someone smile. One day she plans to change the world. Julie is a member of the International Thriller Writers (ITW) and Sisters in Crime (SinC). She is represented by Jill Marsal of Marsal Lyons Literary Agency.

Enter to Win a Prize Package! 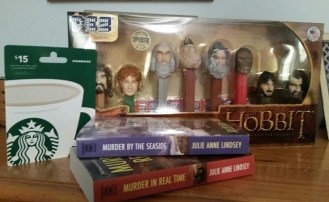 You could win a copy of Murder by the Seaside & Murder in Real Time, plus a Lord of the Rings PEZ set and $15 Starbucks card!

2 thoughts on “A Geek Girl’s Guide to Arsenic, by Julie Anne Lindsey”