Don’t Lose Your Sense of Smell

Give Back (but Know Your Limits) 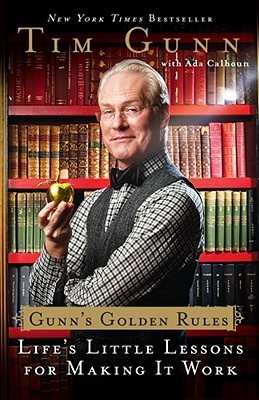 Those are just four of Tim Gunn’s Golden Rules (there are 18 total). And, for so many reasons, this book is a must read for everyone.

Tim Gunn writes with a strong, friendly, and relate-able voice. He shares his life experiences, along with lessons learned. From his childhood in Washington DC to his involvement with Project Runway, Tim Gunn gives readers a candid look at his life.

What makes this book such a good read, is that he doesn’t shy away from the bumps and obstacles we all face in life. Tim (I hope he doesn’t mind me calling him Tim!) writes about a debilitating stutter that lasted through his teen years, his shy personality that threatened his career path at several points, the heartbreaking betrayal he faced during the one serious romantic relationships in his past, making a suicide attempt, and much more.

And every word makes you want to know more, learn more, hear more.

I have long been a fan of Tim Gunn’s but, after reading this book, I have a deep sense of respect for him. He writes about taking the high road (even when it isn’t easy), being kind, nice, and respectful of your fellow human beings (a lesson we should ALL live by – think how different our day-to-day lives would be!), and, of course, fashion. (Though I can’t say that I agree with him that physical comfort is over-rated, I get the point he’s trying to convey.) It’s an inspiring read, truly. A lot of what he writes may seem like common sense, but, it is something that needs to be written. Common sense it may be, but it isn’t common practice. Keeping in mind that a person cannot control others, only oneself, I want to take Tim’s lessons to heart and really try to follow them in my own daily life. And, in that same vein, I would encourage everyone to read and use Tim’s life lessons and golden rules.