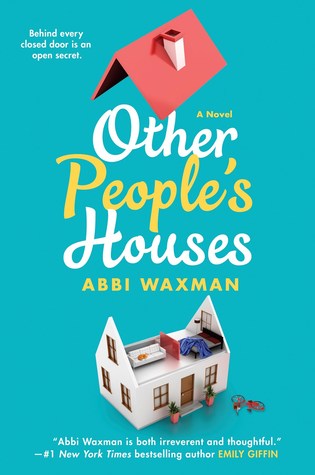 When one of her young charges realizes that she forgot to bring her art supplies to school, carpool mom Frances volunteers to return to her house and pick them up. She doesn’t expect to find her neighbor in a very intimate moment with a man who is not her husband. As Frances watches her neighbor’s personal life chip, crack, and shatter, she also begins to see the kinks in her own family life. And she soon realizes that everyone has secrets–big and little.

This book is for anyone who has ever looked around their neighborhood and wondered what went on behind closed doors. Abbi Waxman writes with a blunt irreverence that makes it impossible to stop reading. Each chapter is packed with scenes of unflinching honest family life and loads of humor. In fact, I found myself snorting with laughter on dozens of occasions!

Abbi Waxman has quickly become a favorite author and I can’t wait to read whatever she writes next.

About the Book
The author of The Garden of Small Beginnings returns with a hilarious and poignant new novel about four families, their neighborhood carpool, and the affair that changes everything.

At any given moment in other people’s houses, you can find…repressed hopes and dreams…moments of unexpected joy…someone making love on the floor to a man who is most definitely not her husband…

As the longtime local carpool mom, Frances Bloom is sometimes an unwilling witness to her neighbors’ private lives. She knows her cousin is hiding her desire for another baby from her spouse, Bill Horton’s wife is mysteriously missing, and now this…

After the shock of seeing Anne Porter in all her extramarital glory, Frances vows to stay in her own lane. But that’s a notion easier said than done when Anne’s husband throws her out a couple of days later. The repercussions of the affair reverberate through the four carpool families–and Frances finds herself navigating a moral minefield that could make or break a marriage.

About the Author
Abbi Waxman was born in England in 1970, the oldest child of two copywriters who never should have been together in the first place. Once her father ran off to buy cigarettes and never came back, her mother began a highly successful career writing crime fiction. She encouraged Abbi and her sister Emily to read anything and everything they could pull down from the shelves, and they did. Naturally lazy and disinclined to dress up, Abbi went into advertising, working as a copywriter and then a creative director at various advertising agencies in London and New York. Clients ranged from big and traditional, (AT&T, Chase Manhattan Bank, IBM, American Express, Unilever, Mercedes-Benz) to big and morally corrupt (R. J. Reynolds) to big and larcenous (Enron). Eventually she quit advertising, had three kids and started writing books, TV shows and screenplays, largely in order to get a moment’s peace.

Abbi lives in Los Angeles with her husband, three kids, three dogs, three cats, a gecko, two mice and six chickens. Every one of these additions made sense at the time, it’s only in retrospect that it seems foolhardy.