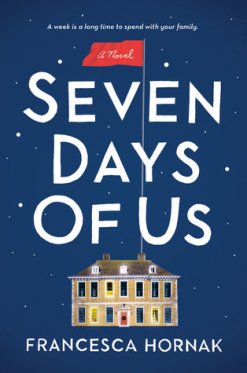 Place: Christmas in the English countryside

People: Andrew and Emma Birch and their daughters Olivia and Phoebe

Plot: Olivia Birch is a doctor who has spent the past months working to treat patients of an epidemic in Africa. Because the illness she has been fighting is highly contagious, Olivia is under orders to keep quarantined for seven days. She heads to the countryside with her parents and sister for seven days of enforced family together time. And it’s an arrangement no one is happy about.

Perspective: Seven Days of Us is told from multiple perspectives, which always reminds me of an epistolary novel, my favorite. It’s a format that the author uses very well to tell a story of family drama. As children, sisters Phoebe and Olivia were close; as they grew older, they grew apart, to the point of barely speaking as adults. A similar path can also describe Andrew and Emma’s marriage. Once a war correspondent, Andrew now critiques London restaurants. He has grown snarky and bitter. While Olivia pulled away from everyone in order to follow her passion, Andrew and Phoebe grew closer and Emma just did her best to keep everyone in her family happy. The Christmas quarantine brings together a fractured family – each person hoarding a huge secret of his or her own.

What I enjoyed most about the book is how each character, while complete as individuals, holds a key piece of the full picture. As much as we readers can feel the interpersonal tension and know how much the members don’t want to be together, they are irresistibly drawn together despite past grievances, transgressions, or the hurt they may have caused one another.

A warm, wry, sharply observed debut novel about what happens when a family is forced to spend a week together in quarantine over the holidays…

It’s Christmas, and for the first time in years the entire Birch family will be under one roof. Even Emma and Andrew’s elder daughter—who is usually off saving the world—will be joining them at Weyfield Hall, their aging country estate. But Olivia, a doctor, is only coming home because she has to. Having just returned from treating an epidemic abroad, she’s been told she must stay in quarantine for a week…and so too should her family.

For the next seven days, the Birches are locked down, cut off from the rest of humanity—and even decent Wi-Fi—and forced into each other’s orbits. Younger, unabashedly frivolous daughter Phoebe is fixated on her upcoming wedding, while Olivia deals with the culture shock of being immersed in first-world problems.

As Andrew sequesters himself in his study writing scathing restaurant reviews and remembering his glory days as a war correspondent, Emma hides a secret that will turn the whole family upside down.

In close proximity, not much can stay hidden for long, and as revelations and long-held tensions come to light, nothing is more shocking than the unexpected guest who’s about to arrive…

About the Author
Francesca Hornak is a British author, journalist and former columnist for the Sunday Times. Her debut novel Seven Days Of Us will be published by Berkley, an imprint of Penguin Random House, in October 2017. Little Island Productions has pre-empted TV rights to the book.

Francesca’s work has appeared in newspapers and magazines including The Sunday Times, The Guardian, Metro, Elle, Grazia, Stylist, Marie Claire, Cosmopolitan and Red. She is the author of two nonfiction books, History of the World in 100 Modern Objects: Middle Class Stuff (and Nonsense) and Worry with Mother: 101 Neuroses for the Modern Mama.

2 thoughts on “Seven Days of Us by Francesca Hornak”