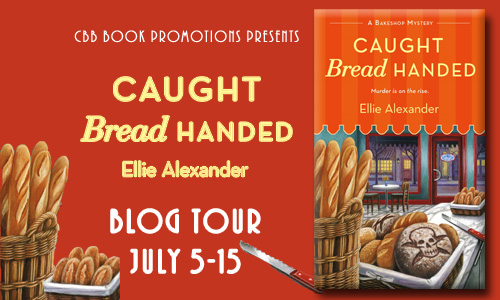 Welcome to my tour stop for Caught Bread Handed by Ellie Alexander! This is the fourth book in the Bakeshop Mystery series and released June 28 by St. Martin’s Press. The tour will have reviews and excerpts as well as a fabulous giveaway! You can find more information and the tour schedule on the tour page.

My Thoughts
An unnaturally warm winter is leading to some unnatural events in Ashland, Oregon. A national fast food chain restaurant has just moved in across the street from the small town’s beloved bake shop, Torte. While the name may sound vaguely Shakespearean, nothing else about the garish, over-the-top Shakesburgers fits with the town’s look or feel, and other business owners are gearing up to oust the newcomer. For heroine Juliet, the drama is just another layer of what she is already dealing with: operating a bakeshop with only one working oven, recovering from a financial situation deep in the red, and juggling her feelings about estranged husband, Carlos, who is in town to win back her heart.

One of my favorite things about reading books by Ellie Alexander and in the Bakeshop Mystery series, is how completely immersed I feel while reading. The scenes and settings are vivid, rich, and distinct. Reading feels more like visiting, walking alongside Jules as she makes deliveries to fellow business owners and stumbles upon the scene of a crime. Another favorite element is all of the wonderfully descriptive passages about what Jules and her staff are baking at Torte. I constantly find myself wishing I could taste the recipes, or looking for a snack to enjoy while I read (though what I come up with is, inevitably, not as good as what I assume the food at Torte would be). Having some of the recipes included is such a treat and I’m always eager to try and replicate them in my own kitchen.

Caught Bread Handed is another wonderful addition to the Bakeshop Mystery series. A fun read, a fast read, and a story that will make your heart race and your stomach growl!

Technically I’d been home for six months. Home for me was my childhood town of Ashland, Oregon. It’s a magical place with its Elizabethan architecture, charming Shakespearean-themed shops and restaurants, inviting outdoor parks and public spaces, and mild Mediterranean climate. Not to mention the warm and welcoming locals who can make a stranger feel like they’ve lived in Ashland for decades upon meeting for the first time.

Our family bakeshop, Torte, sits in the center of my hometown. It’s located in the downtown plaza just a few hundred feet from Lithia Park and Shakespeare’s stairs, a set of cement stairs that lead from the park’s expansive lawn to the Oregon Shakespeare Festival’s theater complex. Walking around the plaza is like stepping back in time. Storefronts are designed in Tudor style with narrow symmetrical buildings, timber framing, and ornate windows.

Ashland has something for everyone from its world famous stage productions, to its funky artistic community, and wide open spaces perfect for adventure lovers. The only thing it didn’t have at the moment was snow. Usually in January, Mt. Ashland’s slopes were coated in deep layers of snow. But not this January.

I looked out Torte’s front windows. The sun hung low in the late afternoon sky. A group of musicians with banjos and an accordion were busking in the center of the plaza. Two well-dressed tourists stopped in front of the bubbling fountains to listen to them play. It looked like spring outside. Bistro tables had been set up in front of restaurants and shop doors were propped open.  It was hard to believe that people were meandering through downtown without coats in January, especially since winter had begun with an epic storm.

A week ago I had been at Lake of the Woods Resort, a remote alpine lodge, for a catering job and had ended up snowed in. Thick white flakes dumped from the sky for three days. Snow fell in record levels causing power outages and making travel impossible. Ashland had been hit by the blizzard too. Customers had to strap on cross-country skis for their morning coffee fix. After the storm blew over the sun emerged from the clouds. It melted the snow and ushered in a stretch of unseasonably warm weather.

I had to admit that I was a little disappointed. I hadn’t experienced a winter in over a decade and I had been looking forward to a change of seasons. My work as a pastry chef for a renowned cruise line had taken me to every corner of the globe. It had been an adventurous ten years. I’d seen nearly every tropical port of call, but the ship always sailed under sunny skies. Winter meant island hopping in the Caribbean and swimming in the Mediterranean Sea. Snow was unheard of in the warm blue waters where tourists took refuge from winter’s harsh winds and swirling storms.

In anticipation of the cold weather months in Southern Oregon, I bought myself a new wardrobe of sweaters, jeans, and thick wool socks. From the looks of the busy plaza outside, I wasn’t going to need them anytime soon. People milled around the fountains and information kiosk wearing shorts and thin sweatshirts. Definitely not winter attire. They looked like they belonged on the upper deck of the cruise ship, not Ashland in January. Since I’d returned from Lake of the Woods the temperature in Ashland had been holding in the mid-sixties. At this rate, I was going to have to break out my summer clothes again.

The sound of mixers churning in the background and the smell of sweet rolls rising in the oven made the lack of snow more manageable. Breathing in the comforting scents brought an instant calm to my body. Being home again had been better than I had ever expected. When I returned to Ashland six months ago with a broken heart, I thought it would be a temporary stop until I found my land legs and figured out what was next for me. That quickly changed. The community had welcomed me in, and working at Torte with Mom and our incredible young staff had given me a new sense of purpose and direction. There was just one lingering problem (literally and figuratively)—my estranged husband, Carlos.

I glanced across the plaza and shook my head. Carlos was at the Merry Windsor chatting with a bell boy in a green and gold stripped uniform. Of course. I couldn’t escape him. I wasn’t sure I wanted to.

I watched them talk. Carlos’s dark hair fell in a soft wave over one eye. The sleeves of his casual white shirt had been rolled up to the elbows, revealing his bronzed forearms. He’d been telling everyone in town that he brought the Spanish sun with him. “You see, this is how we winter in Spain. We drink in the sun along with some lovely Spanish wine.”

Everyone was charmed by Carlos, myself included. It was impossible not to fall under his spell. His sultry dark eyes and Spanish accent were practically irresistible, as was his naturally relaxed personality. He’d been in Ashland a little over a week and had managed to bewitch everyone in town.

Almost everyone. Richard Lord, the owner of the Merry Windsor, where Carlos was staying, didn’t look pleased that Carlos was distracting the bell boy from his work. I shook my head again as I watched his animated speech and hand motions. The bell boy chatted happily as if he and Carlos had been friends for years. Carlos had that effect on people.

My mom, Helen, had the same gift, but she used it differently. Her approach was to offer up a hot cup of coffee, a fresh pastry, and a listening ear. Carlos tended to lure people in with his witty banter and whimsical pranks. Both approaches achieved the same result. Mom and Carlos had a way of putting people at ease. I wasn’t sure that I had the same ability. It’s something I’ve been trying to work on. I think that I come across as too serious sometimes.

Carlos turned in my direction and caught my eye. He blew me a kiss and then waved with both hands in an attempt to get me outside. I shook my head and pointed to the kitchen. Heat rose in my cheeks as I left the window and walked back to my work station. My husband had caught me staring at him. Normally that wouldn’t be a bad thing, but right now it was for me. Having Carlos in Ashland for the last week had been equally wonderful and confusing. He was leaving for the ship in three days. I couldn’t get distracted now. I had too much to do. Like getting our wholesale orders out the door, I said to myself focusing on the stack of orders resting on the kitchen island. 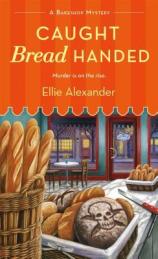 Welcome to Torte—a friendly, small-town family bakeshop where the oven is heating up as high as the body count…

Jules Capshaw is still chewing over her husband Carlos’s return to Ashland, Oregon. Could there be too many cooks in the kitchen? Whatever is stirring between those two will have to wait. Despite the Oregon Shakespeare Festival being dark for the winter, the bakeshop is bustling, the dough is rolling, and there’s no rest for the weary… especially when murder is thrown into the mix.

When Mindy Nolan, the owner of a new restaurant in town, turns up dead, the batter at hand thickens. Jules knows that there was bad blood between Mindy and others in town, and tracking the killer could prove to be an unwelcome treat. And to top it all off, there’s Carlos, who is pleading—with those delicious dark eyes and sexy Spanish accent—for Jules to take him back. Is home where the heart is or will she make a fresh start… and risk getting burned?

About the Author
Ellie Alexander is a Pacific Northwest native who spends ample time testing pastry recipes in her home kitchen or at one of the many famed coffeehouses nearby. When she’s not coated in flour, you’ll find her outside exploring hiking trails and trying to burn off calories consumed in the name of research. Follow her on Facebook or Twitter to learn more. 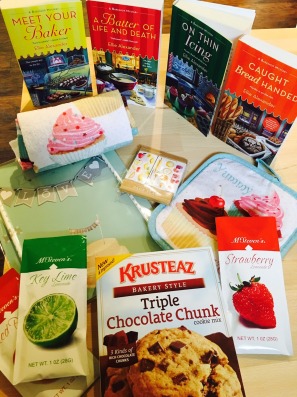 US only.
Ends July 20th
Must be 13 or older to enter and have parental permission if under 18. Void where prohibited by law. No purchase necessary to win.