I have mixed feelings about Between the Devil and the Deep Blue Sea. There is an intriguing atmospheric quality to it, from setting and descriptions to characters and plot points. And the concept is interesting: the arrival of a mysterious and appealing handsome young man coincides with a crop of creepy, unsettling occurrences in a small quiet town. And yet, there are some aspects that kept pulling me out of the story.

A lot of time is spent telling the reader about the falling down old mansion that main characters Violet and her twin brother, Luke, live in. Dubbed Citizen Kane, the house was once grand and the envy of the area. But now it has fallen into disrepair and the once well-to-do family is feeling the pain of penny pinching. But there are incongruities – Violet and Luke’s parents are off gallivanting around Europe, leaving the twins alone at home to fend for themselves, which they apparently do by painting and indulging in specialty groceries and eating out at the town restaurants. But they don’t have money to pay the phone bill, so they have no phone.

The supposed lack of money is what prompts Violet to post for a renter for the Citizen’s guest house. Enter River West, the aforementioned mysterious and appealing handsome young man. Within two heartbeats, Violet has rented the guest house to River, he has unpacked, handed over a wad of cash, and enticed Violet – who, up until now, we are told, has had no real interest in any guys – to fall in love. Strange things start happen. Violet and Luke’s neighbor, Sunshine, sees a creepy figure in an old tunnel; children invade the cemetery armed with stakes made from sharpened sticks, hunting the Devil who supposedly kidnapped a small girl; Luke dreams of a long-dead relative visiting him and filling his lungs with moonlight. And yet, while Violet suspects River has something to do with all of this, she’s inexplicably drawn to him regardless.

As the story continues, more complications enter in – brothers and entangled family histories – leading to a pulse pounding crescendo . . . which sets up a sequel. The author certainly sets a tone for her story, but it isn’t always a skillful one. The writing feels amateurish at times: It was dark. Dark, dark, dark. Dark like coffee poured over the night sky. There’s a lot of that style throughout; like simply repeating the key descriptive word multiple times and then adding in a metaphor that practically shouts, “look at how clever I am!” is a substitute for finesse. And yet . . . I’ve already ordered the sequel from the library, so there was enough in Between the Devil and the Deep Blue Sea to entice me to see how it all ends. (I do love my bad boys of literature and a good romantic subplot.) 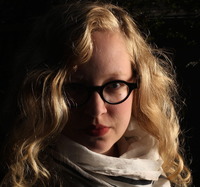 April Genevieve Tucholke is the author of Between the Devil and the Deep Blue Sea and its sequel, Between the Spark and the Burn. She loves classic horror movies and coffee. She has lived in many places, including Scotland, and currently resides in Oregon with her husband Nate Pedersen.