Welcome to the Book Blast for The King of Average by Gary Schwartz! This is a middle grade fantasy that is available for sale now. 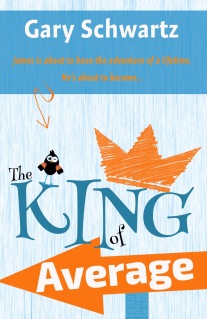 James isn’t the world’s greatest kid, but he’s not the worst, either: he’s average! When he decides to become the most average kid who ever lived, James is transported to another world where he meets Mayor Culpa, a well-dressed talking Scapegoat who recruits him to become the new King of Average.

He’s joined on his quest by a professional Optimist and his grouchy companion, an equally professional Pessimist. Together, they set out on a journey of self-discovery that leads them all the way from the Sea of Doubt to Mount Impossible, the highest peak in the Unattainable Mountains. When James stumbles into a Shangri-la called Epiphany, he uncovers the secret of who he really is.

Follow James on his hilarious, adventure-packed journey to find self-worth in this heartfelt middle grade novel The King of Average by debut author Gary Schwartz.

Gary Schwartz began his professional career as a mime at age 13, performing up and down the Hudson River with Pete Seeger and the great folk entertainers of the 1960s. In the 1980s he appeared in numerous film and television projects including the Oscar-winning feature film Quest for Fire. Schwartz has lent his voice to hundreds of film and TV projects and is the voice of several well-known video game characters, including Heavy Weapons Guy and Demoman in Team Fortress 2.

Schwartz has written for two children’s television series in which he co-starred: Zoobilee Zoo, where he played Bravo Fox; and the Disney Channel’s You and Me, Kid.

Schwartz studied with and became the protégé of Viola Spolin, the creator of Theater Games, the basis for improvisational theater in America. He is a passionate, dynamic improv coach and facilitator devoted to carrying on Spolin’s techniques.

The King of Average is his first novel. To learn more visit gary-schwartz.com.