Welcome to my tour stop for Descendants of the Rose by Juliette Harper! This is the first book in the Selby Jensen Paranormal Mysteries series and the tour runs July 20-31. Check out the tour page for more information.

About the Book:
Selby Jensen’s business card reads “Private Investigator,” but to say the least, that downplays her real occupation. Let’s hear it in her own words:
“You want to know what I do for a living? I rip souls out. Cut heads off. Put silver bullets where silver bullets need putting. You think there aren’t any monsters? . . . I have some disturbing news for you. You might want to sit down. Monsters walk among us. I’m looking for one in particular. In the meantime? I’m keeping the rest of them from eating people like you.”In this debut novel of her new paranormal mystery series, Juliette Harper, author of The Lockwood Legacy books and The Study Club Mysteries creates a cast of characters, most of whom have one thing in common; they don’t have a pulse. The dead are doing just fine by Selby, who is determined never to lose someone she loves again, but then a force of love more powerful than her grief changes that plan.

Join Selby Jensen as she and her team track down a shadowy figure tied to a murder at a girls’ school. What none of them realize, however, is that in solving this case, they will enter a longer battle against a larger evil.

Juliette Harper is an impressive chameleon. This first book in her new Selby Jensen Paranormal mystery series debuts only a few months after the hilariously readable Study Club mystery, You Can’t Get Blood Out of Shag Carpet. Both books are the same in terms of the author and their addictive natures – but that’s where the similarities end. Descendants of the Rose is filled with paranormal characters and situations – ghosts, vampires, werewolves, and demons invade every page. The main character and narrator is Selby Jensen – a widowed private investigator of sorts. Selby has a quick with and a sharp tongue and, at first, I wasn’t quite sure what to make of her. By the end of the book, I knew Selby was someone I would never forget – and someone I would be glad to get to know.

The mystery at the heart of Descendants of the Rose involves a boarding school and the gruesome death of a student. Selby pools all of her known resources and associates to figure out the puzzling murder and comes away with a few new and surprising helpers, too.

The Selby Jensen Paranormal mystery series is a fresh, original, and intriguing new entry in the mystery genre – and one that I’m eager to read more of.

Here’s the set up. My business card says “Private Investigator.” Johnny foots most of the bills. He made money in ‘29. Enough said about his investment skills? Since the Internet, he’s become the great-great-great-granddaddy of day traders.

If I feel a need to make an extra buck or cover up what we really do? I drag out the telephoto, grab a box of Krispy Kreme, and take pictures of some married guy with a hooker through a motel window. Helps the the wife score big in the divorce, and it’s good sport. Helen calls it shooting dicks in a barrel. Those gigs make me look just sleazy enough and just legit enough that the cops leave me alone.

What we really do is kinda paranormal pest control. Most shapeshifters and vamps and things that go bump in the night are just minding their own damn business. I have no problem with what goes bump in the night until bump comes to shove. Truth be told, this “monster” business is pretty racist when you get right down to it.

Look at it this way. They get a better cable package than we do. Better reception. We spring for a few premium channels so we don’t miss Big Love. But the monsters tune in the Deluxe Metaphysical Sports Package. But what they’re broadcasting? Pure basic. The monsters like to stay off the radar.

Hell, I know a perfectly nice succubus who teaches Sunday school. She never sucked out a man’s soul that didn’t need sucking. She’s put down a lot of pedophiles. As far as I’m concerned, the bastards got off easy. It’s her I worry about. Living on a low-moral diet like that has to give a girl heartburn. 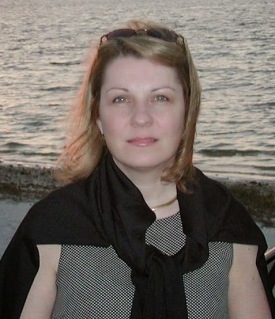 Juliette Harper is the pen name used by the writing team of Patricia Pauletti and Rana K. Williamson. Descendants of the Rose is the first installment of Harper’s debut Selby Jensen Paranormal Mystery series.

Pauletti, an Easterner of Italian descent, is an accomplished musician with an eye for art and design. Williamson, a Texan, worked as a journalist and university history instructor before becoming a full-time freelance writer in 2002.

Juliette Harper is also the author of The Lockwood Legacy, a nine-book chronicle of the lives of three sisters who inherit a ranch in Central Texas following their father’s suicide. Four of the novels are currently available: Langston’s Daughters, Baxter’s Draw, Alice’s Portrait and Mandy’s Father.

And don’t miss her hilariously funny “cozy” Study Club Mysteries, a light-hearted spinoff of The Lockwood Legacy. The books, set in the 1960s, take on the often absurd eccentricities of small town life with good-natured, droll humor. The first book, You Can’t Get Blood Out of Shag Carpet is available with the second, You Can’t Put a Corpse in a Parade, coming in Summer 2015.

3 thoughts on “Descendants of the Rose by Juliette Harper (Review, Excerpt, & Giveaway!)”