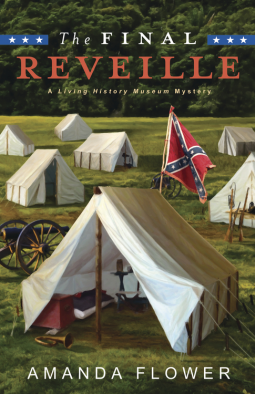 Living history museums have always fascinated me. We have one here in Wisconsin – Old World Wisconsin – but, unfortunately, I haven’t visited there often enough. In the summer, I can never imagine walking through the area in the heat (and how the costumed docents make do!) and in the winter, the museum is only open limited hours. But every time I do visit, I always think I should go back more.

Amanda Flower’s first Living History Museum mystery, The Final Reveille, takes place at Barton Farm, a living history museum in Ohio. In an effort to boost visitors and revenue, director Kelsey Cambridge has staged a Civil War encampment. Battles between the North and the South take place daily and the long weekend is scheduled to conclude with the first annual Blue and Grey ball.

Deaths are expected in any war, of course, but in a fictional re-enactment, they are most certainly not. When Kelsey stumbles upon a Union soldier standing over a body in the Farm’s brick-making pit, she knows something is terribly wrong. Before she knows what’s happening, Kelsey finds herself the prime suspect in the murder of the nephew of Barton Farm’s benefactress. All the evidence seems to paint her as a murderer, but Kelsey is determined to save the re-enactment, the Farm, and her own reputation.

I enjoyed the story, the specifics of the Farm features and artifacts, and the details of the Civil War battles staged to take place during the re-enactment. Kelsey is a fresh face among cozy mystery heroines and I’m already a fan of the budding relationship between her and Chase. The Final Reveille has many of the classic elements of a crime story with a couple of new creative components mixed in.

Disclaimer: I received a copy of this book from the publisher through NetGalley in exchange for an honest review.

The Final Reveille on Goodreads