Something wonderful this way comes. Macdeath is the first Ivy Meadows mystery by Cindy Brown and it’s a fantastic read. 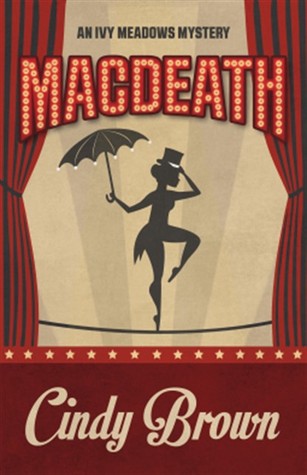 Ivy Meadows is an actress auditioning for a role in the Phoenix Shakespeare Theater’s production of Macbeth. She tumbles on stage (literally) and then into a cauldron with  two other actors, acrobatic witches in a circus-themed production that seems to be laced with toil and trouble. No sooner has the curtain gone up than a member of the cast is found dead. Just about everyone, cast and crew alike, think the death is an unfortunate turn of events, but nothing more than that. Everyone, that is, except for Ivy.

Cindy Brown’s mystery is infused with character, presence, humor, and even some sex appeal. It takes readers into  a mystery, sure, but also behind the scenes of community theater and into the minds of the community of actors. I was immediately captivated by the writing, the story, and the characters, and I hated having to put the book down whenever Real Life or The Day Job called for my attention. Like Ivy, I had a hard time figuring out who was lying and who was honest; after all, the suspects are professional actors.  And while my suspicions weren’t correct, I had one hell of a good time tripping along the investigative tightrope with Ivy Meadows.

Is The Sound of Murder out yet?