I’m not quite sure how I missed out on the magic of Neil Gaiman for so long. Not long ago, I read Neverwhere and, while I didn’t fall completely in love with it, I did enjoy it. More importantly, I really admired the magic of Gaiman’s storytelling. That same magical, masterful quality is readily found in The Graveyard Book. 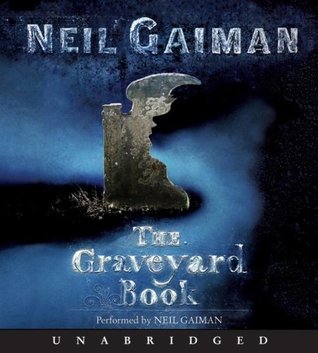 This is the story of Nobody Owens, a boy who wandered unwittingly into a graveyard on the evening when his parents and sister were all killed. The improbable act saved his – Bod’s – life and starts a very unusually mesmerizing story. The mysteries of who killed Bod’s family, why a seemingly ordinary family was targeted, and why that same killer is still searching for Bod run throughout the book and over the years of his life among spirits, ghosts, and ghouls.

What really enhanced the story for me was listening to it on audio book – read by Neil Gaiman himself. He brings his work, Body’s story, and the whole creative cast of characters to life. If you ask me, it’s the only way to enjoy The Graveyard Book! (Thanks for the recommendation, Mindy!)

The Graveyard Book on Goodreads