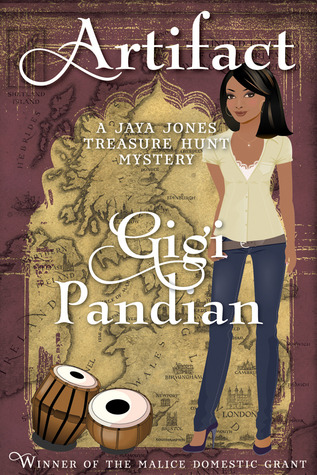 I started the Jaya Jones Treasure Hunt mysteries backwards. It’s not my preferred method of reading a series, but, in this case, it was okay. The outstanding chickens at Henery Press had asked me some time back to read and review the second book in this series, Pirate Vishnu, which I was thrilled to do! I was also excited to go back and see how Jaya met Lane and how her adventures as a treasure hunter (sort of) began.

Of course, the mountain of books I call a bedroom had other plans and, here it is, months later and I’m finally finished reading Artifact. I found this first adventure to be just as much fun, just as engrossing, and just as attention demanding as the second. It’s a great read.

In Artifact, Jaya Jones – a historian – receives a package containing a gold and ruby bracelet from her ex-lover, Rupert. Literally moments later, Jaya hears the news that Rupert has been killed in an accident, making the bracelet, and the note Rupert sent along with it asking for Jaya’s help, all the more cryptic . . . and irresistible.

Jaya knows this bracelet has to have something to do with Rupert’s death, she just doesn’t know what, exactly. Searching for answers leads Jaya to the teeny tiny collegiate office of art historian Lane. There’s a spark of chemistry between the two, but neither one of them wants to admit it; in fact, they spend a good deal of time feeling (seemingly) irritated by one another! (I loved it.)

Before she knows it, the mystery has Jaya travelling from her home in San Francisco to England and then on to Scotland. Fairy stories, legends, Scottish lore, and Indian history all thread together to form an intriguing fair play puzzle mystery . . . that I was never able to figure out before the whole picture was laid out and revealed. Artifact is clever, smart, and fun – the perfect summer read. I can’t wait to see where Jaya’s adventures will take me next!