The good chickens over at Henery Press kindly sent me an advance reader’s copy of Whack Job in exchange for an honest review. As per usual with this publisher, the pleasure was entirely mine. 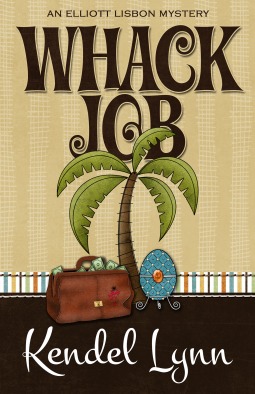 Generally speaking, I read more than one book at a time. The obligatory nonfiction and relevant-to-The-Day-Job pick that I make my way through while in my cubicle. The Diana Gabaldon tome from the Outlander series that I tackle one chapter at a time. The book that I started reading on my Kindle app while waiting for some appointment somewhere. And then the “main book.” The book that is next in line in my reading queue for review. Kendel Lynn’s Whack Job knocked all of the other books out of the water and enticed me to pay full attention to it and only it.

Whack Job is the second book by Kendel Lynn featuring Elliott Lisbon. The series is set in South Carolina and is narrated by the immensely likeable Elliott. She’s the director of a charitable foundation and is also working toward earning her Private Investigator’s license – both jobs seem to offer her ample opportunity for adventure and (to the reader, at least) hilarious mishaps.

Whack Job centers around the eccentric Gilbert Goodsen, who is in the middle of a divorce from his wife, Jaime. Both Goodsens want on the board of the foundation where Elliott works – but only one of them will live to be considered. The mystery is fast-paced and filled with a unique cast of characters. I’m not sure if I’m Team Matty or Team Ransom quite yet, though, to be honest, I’m leaning towards Team Ransom. (I need to indulge in the first in this series, Board Stiff, before making further pronouncements.)

Elliott is wonderful. I related to her on so many levels – as a nonprofit employee at The Day Job, as someone with a similar lean towards OCD behavior, and as someone with a quick wit and sharp mind (if I do say so myself). I easily pictured myself alongside her as she prepped for the Wonderland Tea charity event, readily puzzled out the clues as she tried to track down a missing Feberge egg, and gave her a knowing nod and a fist bump when she noted that, “boys suck.” (Right on, sister.)

Easily and by far one of my favorite books of 2014 and certainly a contender for a spot on the ever-more-crowded bookshelf.