Charley doesn’t quite fit in with the rest of the Agathas – the women in her town’s book club – but she knows associating with them is great for her small business. So, as much as she may feel out of place, Charley stays in the book club. One afternoon, while running late to an Agatha’s meeting, Charley stumbles across the scene of a crime. The breaking news is all any of the Agathas can talk about, especially when their meeting is cut short due to a handsome detective arriving to inform the victim’s next of kin about the death of her sister. Much to the annoyance of that handsome detective (Marc), Charley inserts herself into the active investigation. As it turns out, she’s an adept amateur sleuth, and she quickly makes herself indispensable. But trouble comes when she starts to get a little too close to the truth behind the murders.

The plot and the excellent writing skill fueled my enjoyment of The Book Club Murders. But what really sets this cozy mystery apart from the pack are the characters and the chemistry between them – especially Charley and Marc. Leslie Nagel crafts wonderfully vivid, realistic, and believable scenes page after page. It was a struggle to put the book down, and almost disappointing for it to end! Far and away my favorite new series – I’ll be eagerly awaiting the next book. 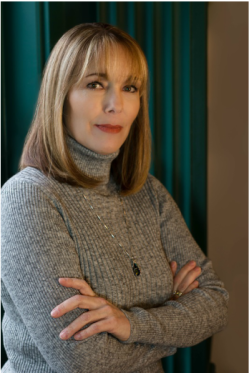 Leslie Nagel is the author of The Book Club Murders, the first novel in the Oakwood Mystery series. She lives in the real city of Oakwood, Ohio, where she teaches writing at a local community college. After the written word, her passions include her husband, her son and daughter, hiking, tennis, and strong black coffee, not necessarily in that order.

In a charming cozy mystery series debut, Leslie Nagel’s irrepressible small-town heroine finds that her fellow mystery book club members may be taking their Agatha Christie a bit too literally—and murder a bit too lightly.

Charley Carpenter has poured heart and soul into her clothing store, Old Hat Vintage Fashions. She’ll do anything to make it a success—even join the stuffy Agathas Book Club in order to cultivate customers among the wealthy elite of Oakwood, Ohio.

Although mixing with the most influential women in town has its advantages, Charley finds the endless gossip a high price to pay. But after two women with close ties to the Agathas are brutally murdered, everyone falls under threat—and suspicion. When key evidence indicates that both murders are the work of the same hand, Charley realizes that the killer has arranged each corpse in perfect imitation of crime scenes from the Club’s murder mystery reading list. She uses her membership in the Club to convince Detective Marcus Trenault to use her as an inside informant. Not that he could stop her anyway.

Intelligent, fearless, and every bit as stubborn as Marc is, Charley soon learns the Agathas aren’t the only ones with secrets to protect. Passions explode as she and Marc must race against time to prevent another murder. And if Charley’s not careful, she may find herself becoming the killer’s next plot twist.