Since Cici Wilde, the heroine of Gunfight at Grace Gulch, sells vintage clothing, I thought it would be fun to look at how authors/publishers come up with the right fashions on with covers. 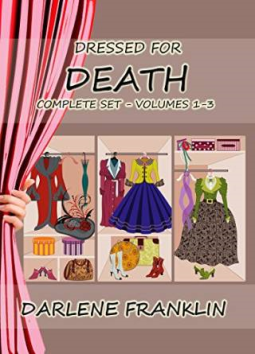 Cynthia Hickey, the owner of Forget Me Not Romances, designs most of our covers. She found one delightful triptych that was perfect for the Dressed for Death mysteries.

We used the middle picture, with the outfit resembling a prairie dress and boots, for Gunfight for Grace Gulch. Land run pioneers!

The pearls hanging from the shelf in the third panel were perfect for A String of Murders, since a pearl necklace was the murder weapon.

The first panel didn’t quite match the final book, Paint Me a Murder, but Cici’s sister Jenna would love the hat and I bet that dress hung on the racks in Cici’s store.

Most of the photos available for historical covers are reenactments, of course. Even then, it’s hard to find the right facial expression, hairstyle, wardrobe. Sometimes we crop the unlikely aspects of the image. We laugh when we find the same model on another book.

Below I’m sharing a few examples of the challenges in creating covers. All these titles are from my Holidays of the Heart series.

This model was wearing a dress more reminiscent of the Civil War, but I loved the model and the Christmassy dress. So we cropped the skirt for Christmas Visitors, an historical romance set in northeast Texas in 1895. I smiled when I saw my model on the cover of a fictionalized biography of General Custer’s wife!

For My Candy Valentine, this dress is fairly appropriate for 1915, but not for the setting of a small town in southern Oklahoma. However, I loved my chocolatier heroine holding chocolates in her white-gloved hands.

One look at the soldier on the cover of Love’s Glory, a WWI era story, and both Cindy and I fell in love. He and the heroine share the blond haired, blue eyed, looks reflecting their German heritage, which is central to the story.

Too bad I can’t take a trip to Cici’s Vintage Clothing Store to buy outfits and find my own models!

The feud between the Graces and the Gaynors is still going strong more than a century after its inception in the 1891 Oklahoma land run. Newspaper editor Penn Hardy is murdered during the reenactment of the most famous gunfight in the history of Grace Gulch, Oklahoma. Cici Wilde, owner of a vintage clothing store, feels compelled to investigate when police suspect people close to her. She soon discovers her talent for sleuthing equals her flare for wearing period clothing. Theater director Audie Howe never expected the reenactment to end in a real murder. He cares too much for the future of the Magda Grace Mallory Theater – and the charming Cici Wilde – to let her face danger alone. Cici and Audie take a dangerous gamble to nail the killer – and lay their lives on the line.

Giveaway!
Interested in an e-copy of Gunfight at Grace Gulch? Simply send an email to jenna.czaplewski@gmail.com by January 25, 2016 to enter. Winner will be drawn at random and notified via email.

Best-selling author Darlene Franklin’s greatest claim to fame is that she writes full-time from a nursing home. She lives in Oklahoma, near her son and his family, and continues her interests in playing the piano and singing, books, good fellowship, and reality TV in addition to writing. She is an active member of Oklahoma City Christian Fiction Writers, American Christian Fiction Writers, and the Christian Authors Network. She has written over forty books and has written more than 250 devotionals. Her historical fiction ranges from the Revolutionary War to World War II, from Texas to Vermont.

The gigantic black hands on the town clock atop our municipal building inched toward twelve o’clock. Audie put a cell phone to his ear.

Cord and Penn, reprising their roles as Bob Grace and Dick Gaynor, burst through the saloon doors, shouting insults.

“You can’t get away with it. You’re a scoundrel and a cheat.” Penn’s face was set into deep lines, hatred aging him prematurely.

“I’m not a cheat. I arrived first, fair and square.

You have to accept it.”

Tension twisted my shoulders. I held my breath.

“That’s what you think!” Penn pulled out a Colt and fired.

A flash of light—popping sounds—two men fell to the ground.

January 17 – Cozy Up With Kathy – Interview